A car flipped over on the Southern State Parkway in Long Island NY on Nov. 30, 2015.  The accident occurred when the 25 year old driver apparently hit the median deviding the East and West bound lanes.  This bad accident lead to a tragic pile up that ultimately took the life of the driver, Brittany Leigh, and injured a responding police officer in separate collisions.

After her car flipped over, Ms. Leigh initially escaped the vehicle relatively unharmed.  A few vehicles driving by pulled over to stop, and help the woman make it to the highway’s right side shoulder lane.  In this location, she was safe from the Southern State Pkwy’s onslaught of traffic.

Once safe however, the driver of the flipped car insisted on dashing back across the highway to obtain her personal items.  Her rescuer’s pleas for her to remain with them were ignored. 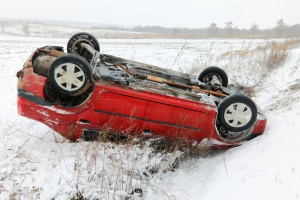 As the woman retrieved her items from her flipped car, she was hit and killed by an oncoming vehicle.

This highway accident is a tragic reminder of the need to always put saftey first.

The accident victim’s family in Baldwin Long Island expressed regret that the passing drivers who had stopped to help failed to do more to prevent Ms. Leigh’s fateful return to the vehicle.

In general, a passing driver is not required to stop and help a stranger in need.  However, if the driver choses to render aid, he is taking on an obligation to act in a reasonable manner.  If the “first responder” drivers in this case had failed to use a reasonable degree of effort or power to prevent the run into traffic, they could be liable for her death.

An accident victim who’s car flipped over is expected to be pretty shaken up and jittery.  Accordingly, the “reasonable amount of care” required by the citizen-helpers may exceed the amount of care required when the victim is more emotionally stable.

Authorities have not accused the driver who struck the woman of any wrongdoing.

If the deceased woman created the hazard by returning to her flipped car, her Estate and insurance carrier can be held responsible to pay the damages sustained by the driver who hit and killed her.

The driver who struck the woman also suffered emotional trauma and sustained damage to her vehicle.

Making matters even worse, a responding police vehicle was then struck by another vehicle traveling along the Southern State Pkwy.

Hurt in a Flipped Car?

Let our compassionate automobile accident attorneys guide you through the legalities of this trying time.  We fight for New York accident victims in Manhattan, Brooklyn, Bronx, Queens, Nassau & Suffolk Counties, and beyond.

Call us anytime for a free motor vehicle accident review.