Hogan, whose real name is Terry Bollea, alleged Gawker invaded his privacy by posting a sex tape on its news and gossip website.

The tape showed Hogan, who was married at the time, having sex with his friend’s wife.

The friend was Todd Clem, a Florida radio host. Clem’s wife, Heather Cole, testified at trial that she was in an “open marriage” with Clem at the time.

Both Hogan and Clem have since been divorced. 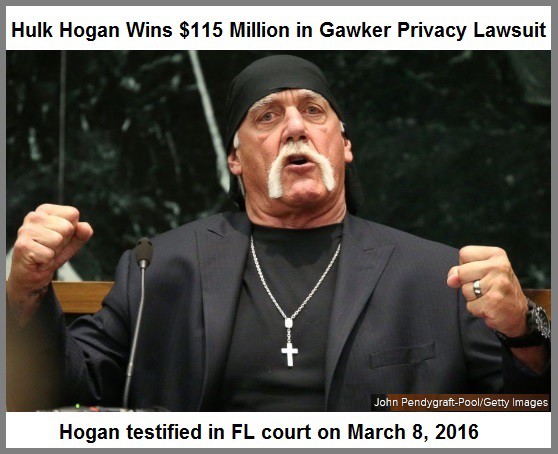 Hogan and Heather Cole both testified at trial they were unaware that they were being filmed.

It is believed that Todd Clem secretly recorded the tryst, but it is uncertain he is the person that leaked it to Gawker.

Regardless of how the tape was made, and how it was obtained by Gawker, Hogan’s attorneys proved that Gawker lacked permission from either Hogan or Cole to release the tape.

The tape, which included private conversations between Hogan and Cole, did not contain newsworthy content or other journalistic merit. It was aired by Gawker solely for profit.

The Florida jury awarded a verdict of $55 Million for lost earnings, plus an additional $60 Million for emotional distress. The total award of $115 Million could be increased by the Court after a hearing on whether punitive damages are warranted.

Gawker and its executives have pledged to appeal the verdict. The media defendants argued the judge erred in refusing to allow certain witness testimony.

The case appears to reflect recent public sentiment against an aggressively nosy news media and in favor of individual privacy rights. As more and more of people’s daily lives are memorialized online, a consensus has been established that private sexual relations lack journalistic merit and do not belong in the public domain.